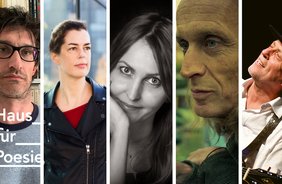 Poetry is clarity - with this enchantingly clear sentence Tomaž Šalamun opens the film Every True Poet. Clarity as an opportunity to grasp the world in the moment, to let it become language: one could bring the poets of the evening to this poetic denominator - in order to then continue to accompany them in all their diversity.

Miljana Cunta (1976), Gregor Podlogar (1974), Jana Putrle Srdić (1975) and Tone Škrjanec (1953) will be accompanied by Vlado Kreslin (1953) is one of the most popular singer / songwriters in his country. Praised as the “Slovenian Bob Dylan”, he combines his musical origins from Prekmurje with influences from many European directions. In addition to their song-like poetics, his texts have a linguistic peculiarity: they are written in his dialect.

This evening for curious poetry explorers not only offers readings and music, but also three poetry films: Vsak pravi pesnik / Every True poet with Tomaž Šalamun, Čikorja an 'kafe, based on the poem of the same name by Iztok Mlakar, and Boles, which is based on a short story by Maxim Gorky.

Marie Kaiser will lead us through the evening with art and wine from Slovenia. The texts will be available in German translation. The films will be subtitled in English.