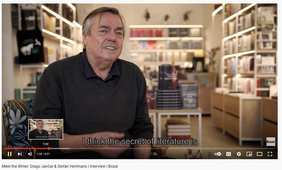 Watch a selection of talks, interviews and performances by bestselling Slovenian authors Drago Jančar, Miha Mazzini and Erica Johnson Debeljak, as well as the performance of the Slovenian slam poetry champion in Brussels, Matic Ačko.

On December 1 a Slovenian bestselling author Drago Jančar was a guest of Bozar Center for Fine Arts in Brussels. Together with Flemish author Stefan Hertmans he participated in a talk titled »Meet the Author«, in which these two major European writers discussed on the power of the past. On this occasion a short video with both authors, filmed in Slovenia and in Belgium, was made.

The event was organised by Bozar, the Embassy of Slovenia in Brussels and the Slovenian Book Agency.

Drago Jančar also took part in a talk with Swiss author living in Berlin, Zora del Buono, at a hybrid event at Literarisches Colloquium Berlin titled »Aufbrüche«. They discussed the events they witnessed and took part in more than 30 years ago – the Slovenian path to independence and the Fall of the Berlin Wall.

Watch the full talk (in German and Slovenian).

The event was organised by LCB and the Slovenian Cultural Centre in Berlin.

After his novel Du existierst nicht / Erased was published by Edition Converso, Miha Mazzini was a guest in the Kulturzeit show at 3sat. The novel about the fall through the cracks of the system, which happened to thousands of Slovenians after the country gained its independence in the early 90’s, was translated by Ann Catrin Bolton. Earlier this year Miha Mazzini was also a guest of the Brussels Book Fair, this time with the French translation of his novel Grandir. 1973, Slovénie, Yougoslavie (translated by Zdenka Štimac, published by Editiones franco-slovènes).

Watch the video about the novel Erased (in German and Slovenian).

Watch the video about the novel Grandir (in English).

American-Slovenian author Erica Johnson Debeljak received the Book of the Year Award for her book Virgin Wife Widow Whore (originally written in English, Slovenian translation by Andrej E. Skubic, published by Mladinska knjiga), a memoir about the sudden and shocking death of her husband in Slovenia, the country where she has made her home since her marriage more than two decades previously, the trauma and grief that ensues, and her rite of passage from wife to widow. More than just a personal memoir, it is a book about the power and endurance of women throughout history. Earlier this year she talked about her book with journalist Ksenija Horvat.

Watch the video (in English).

Slovenian slam poetry champion, Matic Ačko, took part in the European Slampionship on December 11 in Brussels. He won the 6th place and will be taking part in the world championship next year. We congratulate the author!

Slovenian participation at the event was made possible by the Embassy of Slovenia in Brussels and the Slovenian Book Agency.